Backyard Interrupted: How ... came to live on a nature preserve

An unusual nest sparks a series of changes for a homeowner and neighborhood. 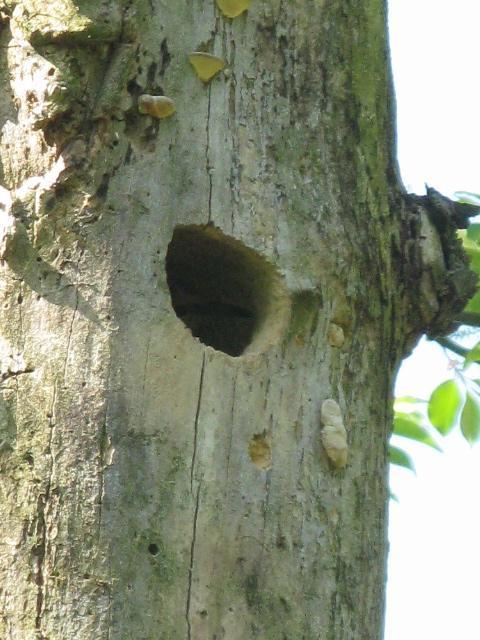 The Ivory-Billed Woodpecker, long thought to be extinct, has re-emerged in the most unlikely of places. Signs of the majestic pot-bellied woodpecker, known for its javelin-shaped white bill, arose over the past few days when an unusually large woodpecker nest sprung up in the backyard of one .... Mr ... first came across the potential nest site while preparing for an upcoming get together at his home. While he didn’t think much of it at first, once news of the nest got out and the first Park Ranger arrived on the scene, ... realized his backyard had become ground zero for a major ecological discovery.

Life has become quite hectic around the ... household since then, as inquiring neighbors and other onlookers have been turned away from the property by a rotation of park rangers who have been brought in to, “protect the pristine nature of the sanctuary the birds have chosen as their home”. The decision to turn the ... backyard into a protected nature preserve was quickly set in motion by the Governor upon the realization that such an elusive bird had chosen to nest near humans. In recent days, the move has meant that both Park Rangers and other members of the Forest Service have been on call to keep camera crews and any other intruders at bay, including the neighborhood cats.

For his part, Mr ... is happy to have outside experts helping him manage this newly protected land. Before the official installation of round the clock shifts, Mr ... found himself forced to shoo away a pair of overzealous birdwatchers with a garden hose: “I asked them to leave my yard but they insisted on monitoring my birdbath. To protect the privacy of the birds, and my family, I gave them a bath of a different kind”. Apart from a few minor incidents, ... says the neighborhood has been understanding and supportive. In fact, the only complaint this reporter heard was from a lady who wished to be identified only as a “cat lover and enthusiast” who was upset that her ‘babies’ were being denied the, “freedom to roam as they please”.

Concern for the happiness of felines aside, a forestry official has told us that their ultimate plan is to return the area to normalcy as soon as possible and minimize the human disturbance in the direct vicinity of the nesting grounds. To this end, the Department of Parks and Recreation has set out a plan to move several community events to a luxurious catered location away from what has for now been dubbed the ... nature preserve. ... has pledged to take every measure possible to ensure the survival of the endangered bird, surrendering use of his beloved backyard in the name of stewardship and preservation.