When most people run away from a fender-bender, they get a suspended license and maybe a rap sheet for reckless endangerment. ...’s hit and run, on the other hand, made an entire river run red and triggered widespread panic about the end of the world. 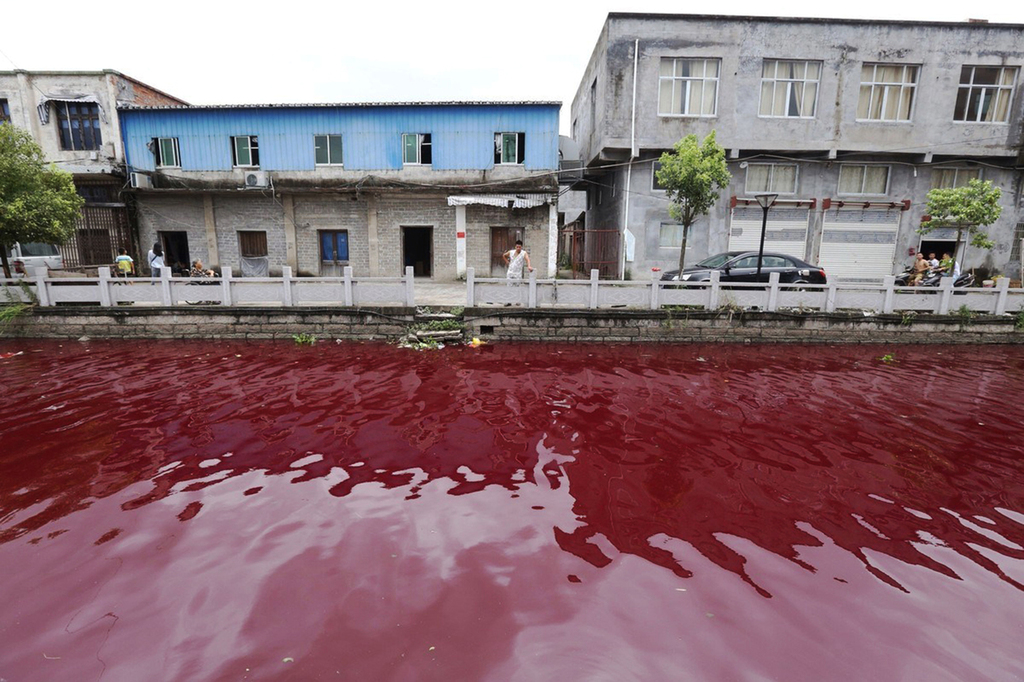 When most people run away from a fender-bender, they get a suspended license and maybe a rap sheet for reckless endangerment. ...’s hit and run, on the other hand, made an entire river run red and triggered widespread panic about the end of the world.

Locals are extremely proud of the bounty of their natural resources, especially their life-giving rivers with pure and clean water. That’s why it was such a shock when they woke up to find a local river running a deep, dark crimson. It was a ghastly hue and people complained of the water tasting strange. There was panic in town, and everyone from priest to scientists were called in to identify the problem and find a solution.“At the time I saw no connection between the river and my accident,” says .... “I was just as scared as everyone else and outraged that our beautiful river had been inexplicably defiled like this.”

State and federal health and environment agency officials came in force, bringing all kinds of equipment to test the water and determine the cause of the river’s terrifying transformation. As the news spread about the blood red river, the pastor at Church started talking about the apocalypse and how the town’s sinners had brought this calamity down upon themselves. “This is what happens when you live secular lives of moral relativism. Now this is happening,” he sanctimoniously proclaimed. End of the world conspiracy theorists started pouring in. They were chanting and praying at Church and along the river banks, and the news crews were there to broadcast the doomsday revival scene live across the world.

Others started searching for other signs of the apocalypse. Astrologers were searching the skies for meteors and other signs of coming darkness. Geologists started preparing for a massive earthquake or volcanic eruption. Health officials were already geared up for all kinds of evil plagues that would follow the river red as blood.

And then there was ... - the sinner who had wrought all of this hysteria - who remained still blissfully unaware about his starring role. Local cops, state troopers and feds worked feverishly to identify the perpetrators responsible. Ultimately, it was the cops that found out the source of the evil. It was dark when the accident occurred and the crash victim, a truck driver, had stopped by an embankment alongside the river for the night. The truck was carrying a load of red dye, and the accident had caused the container to begin leaking.

When the driver woke up in the morning and saw his entire load had spilled into the river, he panicked and drove away without telling anyone. Cops searching the riverbanks saw the huge load of red matter sliding into the river, and called in backup.

It was absolute bedlam as an army of scientists and government officials landed up on the scene. They tested the water and found it was just red dye. The driver’s company is paying huge fines for causing environmental pollution, and both ... and the driver are facing significant traffic violations.

“It’s bad enough that they suspended my license and I can’t drive. But now I’m scared as hell of all of the prognosticators who hold me responsible for making them look like quacks. Usually my reckless behavior doesn’t cause such a stir,” says ....