... was literally steam-cooked after trying to replicate a cold weather experiment he saw on television. 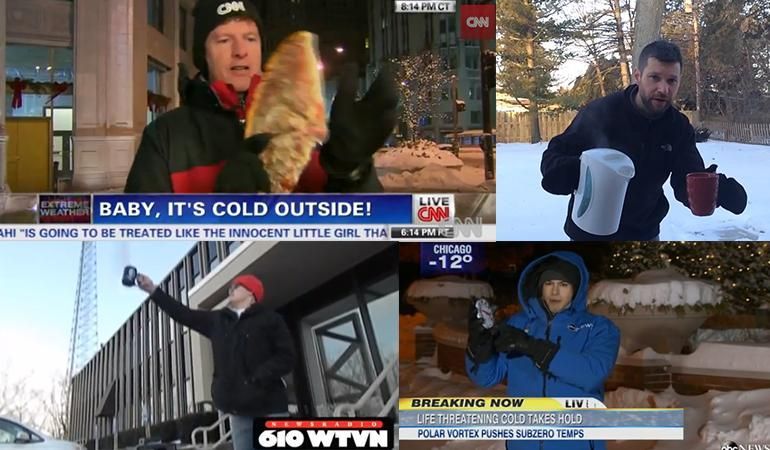 ... was literally steam-cooked after trying to replicate a cold weather experiment he saw on television. During January 2014’s polar vortex, Weather Channel and local news reporters began hurling cups of boiling water skyward in an attempt to provide viewers with a visually engaging demonstration of vaporization at sub-zero temperatures. The footage quickly spawned a host of YouTube copycats, all eager to generate their own bragging rights for enduring temperatures which had become insanely cold. At the forefront of this tragically misguided trend was ..., whose drive to make the most impressive vapor-cloud demonstration landed him in a local burn unit.

“The concept behind the experiment was simple. Boil water, throw it up in the air, and watch it magically sublimate into a spectacular vapor cloud. I mentally rehearsed each step and began to choreograph the demonstration and set up the perfect camera shot” says .... “I still can’t believe I screwed it up.”

But screw it up he did, and apparently ... was not the only one to do so. ...’s folly put his in the company of many other such burn cases as thousands of people left their frigid homes to lob hot water into their yards after watching the Weather Channel’s infernal video. People in warmer climes even tried it out in large freezers and meat lockers.

The fun of the boiling water trick is witnessing the water disappear into a white puff of vapor rather than fall directly to the ground--conclusively proving that it is indeed tits cold. What the Weather Channel reporters failed to mention, however, was an extremely important safety precaution for those trying the trick at home. Boiling water must be thrown away from oneself in the direction the wind is blowing. By failing to heed this precaution, amateur weather stuntsmen and stuntswomen inevitably found themselves at the center of a far less fun demonstration of the effects of scalding hot steam on the human body.

... tried his demonstration once or twice with hot cups of water, and he liked it very much. But the small amount of steam that it created vanished almost instantly and ... wanted to see something more dramatic and YouTube worthy. "The difference between a coffee mug of boiling water and a lobster pot of boiling water is the difference between a fleeting amusement and a proper show" ... explains. So he boiled up a whole bucket of water and let it rip.

Unfortunately for ..., the wind shifted at precisely that moment and started blowing towards him. A huge cloud of hot steam began barreling down upon him, and it was too late to get out of the way. “I knew I was in hot water as soon as the wind changed. I was not at all prepared for blowback...I suppose no one ever is.”

... dropped the bucket and managed to turn away from the steam. he bent over to hide his face and head. That left his back and bottom exposed to the steam, which were cooked to a deep, crimson red like a medium-rare steak.

“It was the most painful experience of my life,” says .... “Even worse was the fact that the hospital staff treated me like a Darwin Awards contender for causing myself so much avoidable pain in pursuit of an ill-conceived and pointless experiment.”

After getting treated for his burns, ... took a selfie of his scalded posterior and posted it in the net, warning people not to fool around with the hot water experiment in cold weather. “Alerting the community to this danger is an important step in accepting my mistake and rebuilding my self-esteem.”