“Idiot With Mobile” – That’s what furious Spanish authorities are calling ... after he stopped in front of a pack of rampaging bulls to take a gratuitous selfie at the annual Pamplona Running of the Bulls festival. 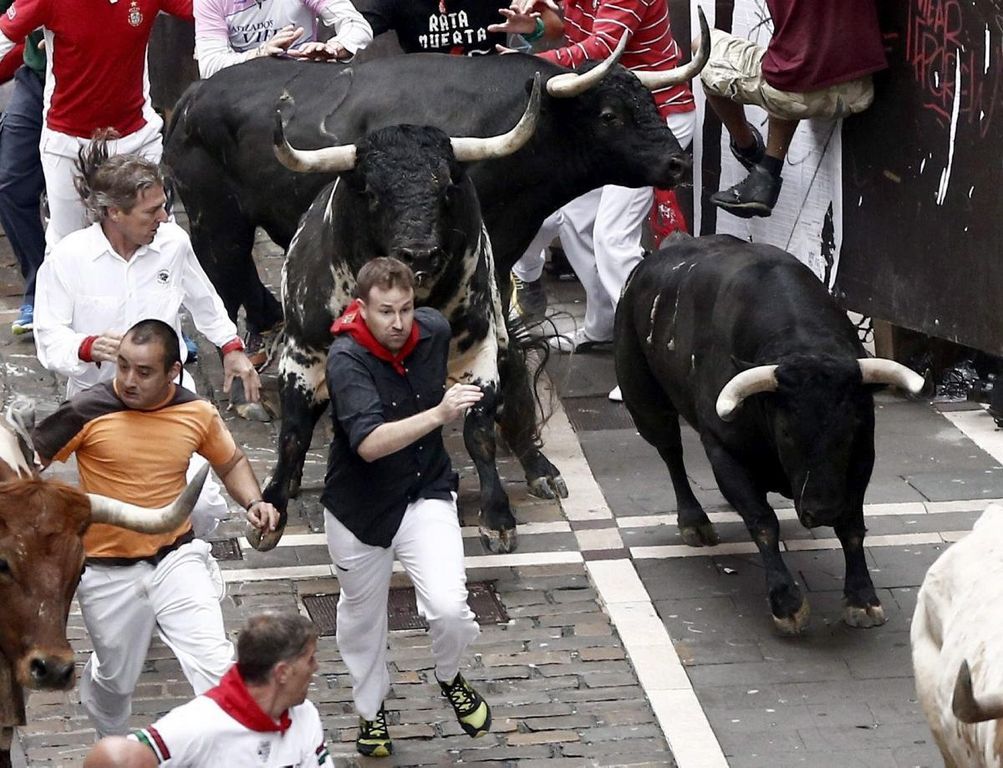 “Idiot With Mobile” – That’s what furious Spanish authorities are calling ... after he stopped in front of a pack of rampaging bulls to take a gratuitous selfie at the annual Pamplona Running of the Bulls festival.

After looking at all the options for a holiday, ... chose Spain. Apart from the food, culture, architecture, beaches and favorable cost of living, ... had secret desire to run with the bulls. “Since I was little I have always had this deep yearning to participate in the annual Pamplona Running of the Bulls festival and take a selfie with rampaging bulls framed in the background,” said ....

People run in front of the bulls every year for many different reasons. Some want to test their own courage and agility, others do it on a dare. Amidst these dubious motivations there are also hordes of lemming-like attention seekers, drawn like flies to an electric bug zapper, who have no idea they are getting into.

... was a whole new breed in this lot, combining extreme bravery with absolute and utter stupidity. Having given scant consideration to the inherent dangers of the run itself, ... decided to up the ante and attempt to capture a one-handed photograph while running for his life. For ... the decision was a no-brainer. “What’s the point of running with the bulls if you can’t photograph yourself posing directly in front of their deadly horns?” ... committed himself fully to his ill-conceived plan. He would obstruct the path of rampaging bulls and stop to take a selfie, completely oblivious of the fact that all other runners would be trying their hardest to do just the opposite--save their lives and avoid being gored by maneuvering away from the beasts.

The bull run in Pamplona is one of the few urban places in the developed world where you can actually face dangerous animals and seriously endanger your life without breaking the law. But the authorities don’t actually want to see anyone injured or dead. They take extensive precautionary measures, and make sure people are familiar with the best practices and procedures for avoiding a fatal goring.

Of course, taking a selfie has never been on the recommended list. The frightened and enraged bulls are not going to stop and pose for a perfect group shot. They will trample and impale you to death and rampage on without breaking a sweat. You might snap a picture you will never forget, but it probably won’t be for the reasons you had intended.

Even so, this is what ... wanted to do, and he managed it just right. He started running hard ahead of the bulls, stopped for just a second to hold up his phone and take the selfie, and then continued running mere inches ahead of the lead bulls that thundered towards him.

Three other runners got gored, but ..., by pure dumb luck, didn’t even have scratch on him. The authorities, however, were understandably livid. It’s hard enough managing the event without a major mishap, but if people stop to take selfies, even more runners lives will be placed in unnecessary danger.

The Spanish government has fined ... a significant amount and banned any further use of recording devices by people running with the bulls. They also printed out pamphlets with ...’s mugshot and a headline that said “Idiota con el Movil.” The pamphlet makes it pretty clear what people should not do with their mobile phones, and ... is now the posterchild for all the idiotas at Pamplona who fail to respect the grave danger the animals pose. “I may be an Idiota con el Movil, but I’m also the only idiota in the world who has a Facebook profile worthy selfie in front of the bulls at Pamplona,” boasts ... with a self-contented smirk.