The Golf Swing Heard Around the World: ... Delivers the Ultimate Slice

..., an amateur golfer, terrifies US President and his Security Guards 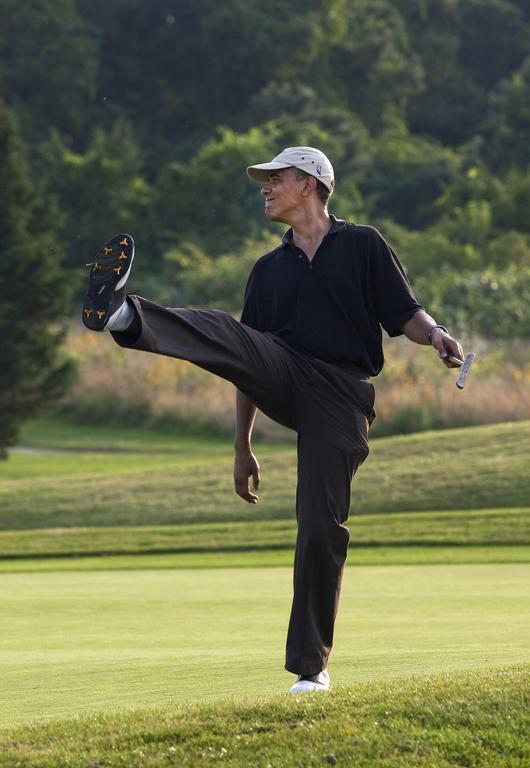 After the assassination of Osama Bin Laden, the security cordon around the US President had become slightly relaxed. Prior to this event, security protocols did not even allow him attend to his most basic personal chores in peace. Recently, however, staff had allowed the President to keep the window of his car slightly open on his domestic trips.

Nevertheless, in a bizarre incident, ..., an amateur golfer, inadvertently scared the living daylights out of the President and his security guards. Security measures, including rolled up motorcade windows, were immediately reinstated.

It happened during President Obama’s recent visit to a local diplomatic function. The Presidential car and the entire security cavalcade of over 40 vehicles cruised towards their destination with royal dignitaries. As allowed under the new security rules, and as a courtesy to his fellow Americans who had lined up along the roads to greet him, President Obama had kept one window of his car slightly open.

Around that time, ... was enjoying a friendly golf game in a public golf course. It was a pleasant day and ... had completed 4 holes with his group and was preparing to take a driver shot for the 5th hole. The fairway inside the course ran parallel to the adjacent main road to the right of the fairway.

... swung the driver with supreme confidence. It was a forceful hit, but a bad one. The ball sliced off the clubface severely, careening wildly beyond outer boundary of the course and leaving ... red-faced with embarrassment.

Exactly at that time the Presidential cavalcade was passing by the golf course en route to the city. The ball hit by ... hurtled towards the reinforced motorcar and ripped through the open window slit of the moving vehicle, landing inside. It rebounded several times inside the cabin bouncing off the doors, floor and roof before coming to rest. The episode left the President and two security guards sitting inside the car frightened and bewildered. The cavalcade immediately stopped; the President was rushed to the back-up car and moved quickly into the city. The car that was hit remained at the incident point. The bomb squad was summoned to defuse what was presumed to be a potentially dangerous ‘golf bomb’.

The security guards wasted no time in identifying ... and taking him into custody. Suspecting him to be a dangerous assassin, they took him to an unknown destination for interrogation. His repeated pleas that he was a poor amateur golfer who played with a significant handicap failed to cut ice with the interrogators.

Several hours later, the bomb squad declared that the object was indeed a regular golf ball and not a bomb. The representatives of Taylormade, the manufacturer of the ball, confirmed that the ball had not been tampered with. ... was then let off with a stern warning that next time, if he ever made a wild swing near the Presidential car, he would face serious federal punishment.