... wanted to believe in something, but he found the spiritual requirements of traditional religions out of step with a soul that existed primarily online. So he decided to create his own religion based on something he liked a lot – Facebook. Little did he know that his words would be taken as divinely inspired digital prophecy. 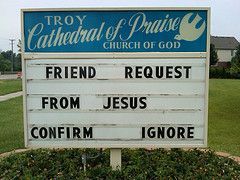 ... wanted to believe in something, but he found the spiritual requirements of traditional religions out of step with a soul that existed primarily online. So he decided to create his own religion based on something he liked a lot – Facebook. Little did he know that his words would be taken as divinely inspired digital prophecy.

“While perusing my Facebook newsfeed I began to see answers to life’s deepest questions, answers that provided structure to the seeming chaos of an indifferent universe,” said .... He laid out the basic tenets of his new faith for the good people on Facebook. Within Facebookism’s dogma, Mark Zuckerberg would be God of the Gods, a divine leader ruling over a virtual world where every human exists as a mere avatar of a true digital self controlled by the Gods of Facebook.

Zuckerberg was the almighty creator of this world, while Facebook COO Sheryl Sandberg and others in Zuckerberg’s orbit were anointed Gods and Goddesses, angel investors and Winklevoss demons. According to ...’s gospel, these deities exercised absolute control over the fate of human avatars through their divine omniscience, omnipresence, and omnipotence within the virtual domain. Within ...’s cosmology, Zuckerberg retained papal infallibility on all matters of faith, namely his eschatological belief that salvation will only be achieved by unification of every public and the private self into an all-knowing one.

... posted his now-canonical scriptures of Facebookism on his Facebook page, eager to become the fledgling faith’s primary apostle. “The potential to proselytize in the digital age is nearly limitless,” said ..., explaining the immediate popularity of his newly created religion. “Especially when you have Facebook promoting your posts.”

Likes and comments poured in by the thousands, and people started pledging their everlasting loyalty and faith in their God Mark Zuckerberg. ... was now the high priest of this religion, and a respected arbiter of theological concerns. People were now suggesting customs and rules for the religion. Some customs, such as a holiday and celebration of the birth of their God on May 14th, remained completely uncontroversial. Others, such as labeling anyone not on Facebook a heathen, were heatedly debated but still adopted by the laity.

The commandment that ultimately destroyed ...'s authority as religious founder was the rule that anyone found consorting with the heathens on other religions (read social networks) should be immediately excommunicated. ... had a Twitter account and was an active user, a sacrilege that was unearthed when a Facebookian hagiographer was producing a Wikipedia page for High Priest ....

This scandalous revelation shook the faith to its core. Their own high priest, the one who had brought the stone tablets and smartphone messages of the Gods down to the people, was a heathen himself. Zuckerberg personally excommunicated ... as a digital Judas beyond redemption. A new Facebook page was created for the religion, and ...’s facebook page was now vilified as Satan’s lair.

According to ..., “Facebookian intolerance led to a great schism.” Since his excommunication, ... has launched his own counter-reformation. “After endless soul-searching and deep contemplation, I arrived at a broader pluralistic truth in which all social networks share the same harmonious vision of interconnectivity.”