Empire Strikes Back! Star Wars Stormtrooper ... Triggers Panic and Shuts Down the Town

... was walking down main street dressed up as a stormtrooper, but to bystanders lacking Star Wars cultural literacy, all they was a kook with what looked like a gun. The rest, as they say, is history. 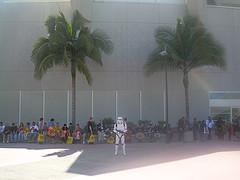 ... was walking down main street dressed up as a stormtrooper, but to bystanders lacking Star Wars cultural literacy, all they was a kook with what looked like a gun. The rest, as they say, is history.

Talk about a storm in a teacup. Well, technically it was a stormtrooper near a strip mall, but for several tense hours it seemed to onlookers as though a violent standoff was imminent. ... had merely wanted to shoot a video for a Vine (that’s a social network for posting short videos). He had just opened a Vine account appearing as a Star Wars stormtrooper, and needed a video to make his posting look really authentic. “I have always believed that it is essential not to cut corners when making a selfie video,” ... explains, “no expense can be spared for the sake of realism and artistic integrity.” ... envisioned the shoot as a social commentary on America as an increasingly monolithic surveillance state.

Unfortunately, ...’s attempt at subversive performance art went hopelessly awry when a store owner saw the plastic gun that came with ...’s stormtrooper outfit, and preferred to be safe rather than sorry. The owner called the cops and reported that there was a weirdo walking up and down the street with what looked like a gun.

In today’s climate of mass shooting sprees and school lockdowns, this police call really set the ball rolling . The police responded in force, blocking off the street, asking people to stay in-doors, and telling all the store owners on the street to close up and stay inside or use back exits leading away from the street. Again, just to be safe, the local cops called the state authorities. SWAT teams and emergency responders were quickly dispatched to beef up the response. State authorities, just to be safe, called the feds who activated emergency protocols to shut down air traffic in and out of the whole region. Federal investigators were now on their way to handle the emergency.

“I was just sweating hard inside my suit and wondering how to get out of the mess,” said .... Nobody wanted him to move an inch, and they wouldn’t come close or give ... a chance to explain his true artistic ambitions. There were a lot of people with large guns, and more seemed to be coming in with every passing minute.

They didn’t want to take a chance and end up making the guy in the stormtrooper suit mad. After all, he had a gun in his hand, and who knows what else under that high-tech suit? What if that suit was bullet-proof? They were all waiting for somebody else to come and take charge.

By the time the feds arrived, the story of the stormtrooper attacking and shutting down a whole town was all over the news and social media. There was intense hysteria – was this some crazy lunatic, or maybe a foreign power invading the country? Or maybe extraterrestrials? Could it be a publicity stunt for a new Star Wars movie in the wake of the Disney/Lucasfilms buyout? Anything was possible.

The feds finally worked out how to approach the stormtrooper without endangering anyone. They called in a drone and sent it over to float above .... The drone was equipped with a video camera, microphone and speaker, so they could communicate with the target. They asked him what he wanted, and ... explained that he was just filming a harmless agitprop video that he wanted to use on the Internet.

They asked him to drop the gun and take off his costume, which ... did at once. Then ... and his cameraman were taken into custody and whisked away to an unknown destination for “debriefing.”

“The near-authoritarian response to my Vine video production perfectly underscores my point as a director,” says ..., “we are indeed living in dark times.”