How does a broken laptop end up as the cause of a raging worldwide debate over Internet free speech rights? Ask ..., who triggered off a global hunt to stop unauthorized distribution of his pictures after they were posted online by computer repair Geek Squad employees. 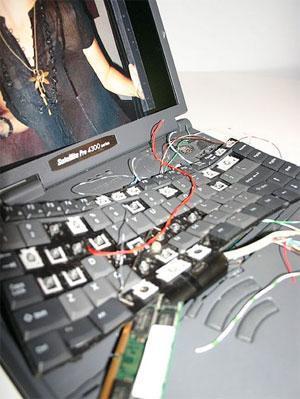 How does a broken laptop end up as the cause of a raging worldwide debate over Internet free speech rights? Ask ..., who triggered off a global hunt to stop unauthorized distribution of his pictures after they were posted online by computer repair Geek Squad employees.

When ... brought in his busted laptop, he had no idea it was about to become one of the most famous laptops in the history of laptop repair servicing. A year after he bought it, it started giving him problems so he took it to an authorized Geek Squad repair team.

At this point, it should also be mentioned that ... had, for reasons that remain unclear, a vast database of unseen explicit pictures and videos of celebrities stored in the laptop--pictures that ... never intended to be made public. Putting a laptop filled with pictures and videos of naked celebrities in the hands of underpaid computer geeks was like giving a bunch of monkeys a loaded gun and telling them not to squeeze the trigger. It was bound to happen – and they didn’t waste any time in sharing and publishing a lot of it on social media and elsewhere on the web. “I just can’t believe they would take all of my never-before-seen and too-hot-for-tv celebrity content and share it with the world without my explicit consent,” expressed ... in outrage, “I had those pictures sitting in a desktop folder clearly labeled ‘Confidential Celebrity Media - Do Not Share’”

Nevertheless, when the pictures went live it violated much more than ...’s privacy rights. For the celebs and public figures involved, the racy pictures and videos set of a firestorm of tabloid journalism. They brought their lawyers in and the entire entertainment industry with all its heavyweights stepped in to support the lawyers. The local police called in the feds, because this was now well beyond state lines. The feds called in Interpol, and the entire world’s police started leaning on anyone who was publishing ...'s celebrity pictures.

Slowly but surely, agencies were able to bring the scandal under control when the issue moved from the tabloids to free speech activists. This was a whole new ball game, because free speech activists are driven by broader ideological concerns, and establishing vital precedents in a larger agenda, than quickly resolving the immediate issue at hand. For these activists, posting such lurid pictures was not a violation of oxymoronic celebrity privacy rights, but instead an act of free expression on the part of the Geek Squad. ..., a general free-speech supporter, still found the argument absurd. "If I wanted my secret celebrity pics blasted across the internet I would have clearly labelled them creative commons. That was my private stash for my own private enjoyment."

The entertainment industry, cops, lawyers and lobbyists tried to shut it down by arresting and jailing anyone who was publishing the pictures. But that only added more fuel to the fire as the mainstream media and other activists piled on and started distributing the pictures to protest the heavy-handed crackdown and their right to free speech.

“I was aghast at how quickly it snowballed from a laptop malfunction, to leaked pictures, to an Interpol operation, and then a global fight over free speech,” said ..., “I never imagined that collecting titillating unreleased celebrity photos as a private hobby might transform into such a public scandal.”

Unable to find any more scapegoats, the entertainment industry turned on .... The police ripped his place apart and took whatever data they could find. It all added up thousands of pictures and videos, and most of it unpublished. Celebs involved and depicted in the pictures and videos were called in for questioning.

Some of them left the country and took long vacations at undisclosed retreats. ... himself is now hiding from the limelight, and steering clear of celebs. “I think I have learned my lesson” ... reflects, “now I keep all of the controversial and confidential tabloid-ready media I come across locked securely in the cloud, where nobody can ever find it.”