Born Again? ... Freed by Firemen After Being Trapped Inside Vagina

A team of two dozen firemen-turned-midwives worked all night yesterday to free ... from the death grip of a vagina that refused to let his go. The spectacle of ... emerging from a tight spot was broadcast by local news crews to a shocked and dumbfounded public, images of which have since gone viral online. 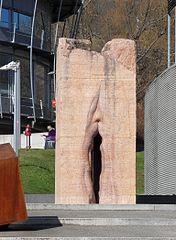 A team of two dozen firemen-turned-midwives worked all night yesterday to free ... from the death grip of a vagina that refused to let him go. The spectacle of ... emerging from a tight spot was broadcast by local news crews to a shocked and dumbfounded public, images of which have since gone viral online.

... was traveling on holiday, visiting a friend who was studying at a large university. Outside the university’s art department sat a 32 ton stone sculpture entitled “Gateway to the World”, featuring a sacred marble yoni representing the doors of human existence. Overwhelmed by curiosity, an intrepid ... set out to explore the sculpture’s dark recesses and sidled through its marble lips feet first. “I was captivated by the Gateway’s invitation, and decided I needed to see firsthand what secrets lay inside.” ... was struck with the Gateway’s realism, and began to proceed with gentle determination to penetrate the sculpture’s canal. ... took a deep breath and squeezed the rest of his body inside. Once inside, ... soon realized he could go no deeper. As he tried to extend himself just a few inches further, he lost his footing and slipped. His body wedged perpendicular to the Gateway, his head trapped in darkness with his feet dangling helplessly outside the vagina.

Several students passing by saw the breech birth, and after rounds of laughter and smartphone pics, decided to phone campus administration to commence an extraction procedure. Realizing he was in a jam, ... began to panic. “I thought it was curtains. I knew I should have pulled out sooner.” By now, crowds of students had stopped to gawk at the odd spectacle of ... stuck in their university’s vagina.

Within a few minutes, the whole university was gathered outside in a scene of utter chaos. Professors and students alike tried to bring their knowledge of science and the human anatomy to bear to free .... They tried to coach ... to make his body completely limp as they tugged on each foot, but the vagina still stubbornly refused to let go.

Finally, the cops arrived and were followed soon after by a team of firemen. They tried to extricate ..., but quickly realized his body was too firmly stuck to be eased out by conventional means. Using veterinary grade silicone-based lubricant, and working by hand and forceps, teams of firemen took turns weaseling ... out of the vagina. “Being born isn’t any easier the second time around” ... recalled.

... handled the humiliating ordeal with remarkable aplomb, apologizing humbly to university officials and promising to do more than pay lip service to the policy of looking, rather than touching, public art. The university’s art department has agreed to use ...’s cunning stunt as an opportunity to raise cultural awareness about the significance of yonis as a symbol of creative power and the cyclical nature of life.