Johnny Cash was a fabulous singer, but is it ethical to be brainwashed into liking all of his music? ..., who accidently invented a medical implant device that makes people rabid fans of Johnny Cash, thinks there’s nothing wrong with bioengineering music appreciation. 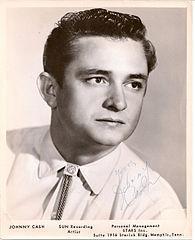 Johnny Cash was a fabulous singer, but is it ethical to be brainwashed into liking all of his music? ..., who accidently invented a medical implant device that makes people rabid fans of Johnny Cash, thinks there’s nothing wrong with bioengineering music appreciation.

It all began when ... was experimenting with treatments for obsessive compulsive disorder (OCD) and anxiety for patients unresponsive to drugs and psychotherapy. It seemed modern medicine could offer these patients scant relief with its non-invasive techniques, so ... decided to slap together an untested device that could be implanted into a patient’s brain. “Sticking wires into a patient’s head seemed like a no-brainer” said ..., who figured that electrical stimulation to key brain regions would be likely to change deeply ingrained thought patterns.

A few trusting subjects volunteered, and ... implanted electrodes deep into their brain to provide a random pattern of stimulation that just might keep their OCD symptoms under control. It worked better than ... could ever have imagined.

The patients were not only free of OCD symptoms, but they looked to be a much better in other ways too. They were confident and happier, developing social skills previously unthinkable. It would have easily been a Nobel Prize winning invention for ..., except that each patient started displaying a minor quirk in his or her behavior. Patients became devout fans of Johnny Cash. It didn’t matter how many times they heard the same songs, and it didn’t matter which of Johnny Cash’s songs or albums was playing, the mere sound of Cash’s voice drove them into a state of pure ecstasy. “It felt like I was walking the line between medical breakthrough and medical anomaly” recounts ....

... found that his patients seemed entranced by Cash’s deep throated voice. Soon he realized this response was caused by the electrodes sending impulses into the brain’s nucleus accumbens, the part of the brain that handles pleasure and addiction. Somehow, the electrodes had convinced the patient’s nucleus accumbens into liking Johnny Cash’s voice, and now nothing ... said or did could reverse this effect.

Obviously, there was no way this device was going to meet medical approval for OCD patients, so ... decided to make lemonade with the lemon he had on his hands. He decided his brain stimulation device could work as a way to make people love certain types of voices, instead of being used as an OCD implant. This week ... was issued a patent after proving that his device could be used to make implant recipients love voices at different pitches, in effect manufacturing a diehard music fan. ... insists that the device could prove especially helpful for people who don’t have any interest in music. Implant wearers could pick their poison out of music performers throughout history – Rolling Stones, the Beatles, U2, Madonna, Springsteen, Nirvana, Jay-Z – you name it, and become rabid fans of their selected musician.

Some consumer groups and music industry associations are lobbying to have the device banned, claiming it negates free will and will eventually degrade the quality of music as artists find ways to gain fans using high-tech implants instead of talent. To this ... responds, “the music industry already has plenty of ways to generate fans in the absence of musical talent. They definitely won’t be needing this revolutionary music-brainwashing device.”