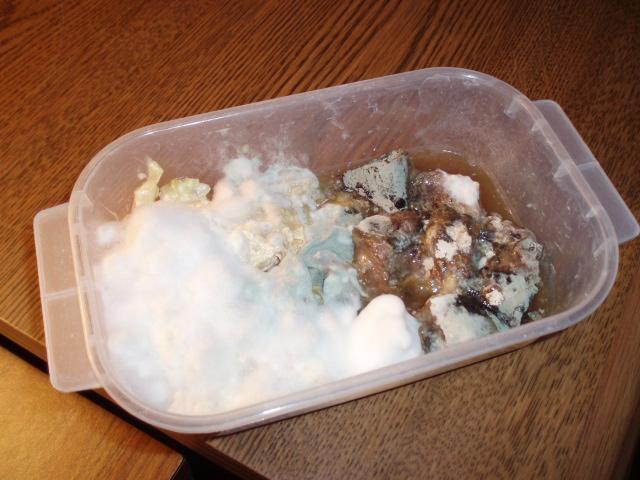 Bacteriologists have confirmed that the greenish fluffy-white growth on Mr. ...’s five-week old pasta leftovers is indeed a new mutant species, dubbed Novosphingobium ...ensis. ... took an interest in the leftovers when they were discovered in his refrigerator during a long-overdue cleaning. The bacteria culture, which had recently changed from blue-black to a whitish green cloud of noxious putrefaction, appeared monstrous beneath its tupperware lid. “It looked like the grossest thing I have ever seen abandoned in a fridge” ... clearly remembers. When he removed the lid, a foul stench filled the kitchen, seeping through its windows and fumigating the surrounding rooms. ... quickly passed out, dishwashing glove on each hand, dropping the toxic leftovers on the countertop.

Soon his neighbors grew concerned, knocking on the door to see if everything was alright. They had caught wind of the rotting pasta, whose deathly scent had begun to generate alarm well beyond the walls of ...’s kitchen. When nobody answered, concern mounted and ultimately rescue teams were called in, arriving in bio-hazard space suits. ... was immediately evacuated from his kitchen and revived outdoors. The support team had never encountered such a powerfully offensive bacteria, and spore samples were taken to a local lab for culturing and analysis.

Lab tests confirmed that the mutant species had evolved rapidly in ...’s fridge, which they described as a temperature-controlled crypt where half-eaten food goes to die. “It was a bit embarrassing, having let my leftovers go off like that. But at the same time, it is remarkably satisfying to know that my poor housekeeping has given rise to an impressive scientific discovery” reflects .... The lab offered to let ... give his name to the species, a dubious honor he immediately embraced. “Even if I accomplish nothing else, I will finally be remembered for something. Now my old disgusting pasta will become my legacy.”

Bacteriologists will continue to study Novosphingobium ...ensis in order to understand how it differs genetically from normal kitchen bacteria and why it produces such hazardous aromas. They will also begin attempting to develop antibiotic measures against Novosphingobium ...ensis in order to contain future outbreaks. ... looks back on the incident with a mingled sense of awe, repulsion, and humility, acknowledging that it is always best to be honest when deciding what to put back in the fridge and what to throw away. “I realize now that I was lying to myself when I thought that I would reheat that tupperware of pasta. Nevertheless, I am pleased that being a kitchen slob has taken me this far.”