After reading Elizabeth Gilbert’s Eat, Pray, Love: One Woman's Search for Everything Across Italy, India and Indonesia, ... became inspired to take time off from his busy life and make his own trip to Italy, India, and Indonesia in search of love and enlightenment. 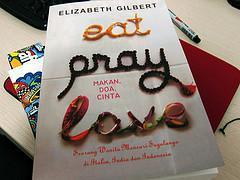 After reading Elizabeth Gilbert’s Eat, Pray, Love: One Woman's Search for Everything Across Italy, India and Indonesia, ... became inspired to take time off from his busy life and make his own trip to Italy, India, and Indonesia in search of love and enlightenment. ...’s decision to follow in the footsteps of Gilbert’s now well-trodden trail was fueled primarily by his desire to think outside the box and discover his own unique path to self-fulfillment. ... insists that it was destiny that brought Gilbert’s memoir into his hands. “Oprah said it was a must-read so I did. Then Julia Roberts starred in a movie version and I was like, ‘drop everything ... because you are going to Italy, India and Indonesia!” ... remembers, noting that Gilbert’s new-age transformation was fueled by the courage you get when you don’t have much left to lose, a theme he found profoundly resonant. “Through her work, I found that same courage.”

In her now canonical memoir, each step of Gilbert’s journey has become a template that so many others, both men and women, are now following as a lifestyle choice. Step 1 begins with Gilbert giving up her career. “That step was a no brainer” ... recalls, who spared no time purchasing his round-the-world ticket while the credits rolled on the 2010 screen adaptation. Step 2 is going off to foreign lands in search of some deeper meaning. As many critics have noted, this step is also a good way to leave behind the depressing life one faces back home while experiencing the thrill and adventure of getting laid with complete strangers one will never have to see again. ... remembers this step fondly, referring to it as “the most enlightening” part of his quest for personal realization. Step 3 is blogging and writing about it, sharing selfies and other pictures and videos on social media, and possibly landing a book deal that makes up for one’s lost career. Done well, Step 3 promises to give you back control of your life, in the process making you famous, rich and successful.

This part did not go so well for .... “Nobody really seemed to care about everything I was discovering on my unprecedented journey through Europe and Southeast Asia. To make matters worse, the revelations from my inner-quest for meaning received almost no likes or blog comments. No matter how many people I slept with, or how many religious sites I visited, or how much yoga I did, it was as if nobody bothered to take the slightest interest in my exotic quasi-spiritual experience.” ... was crushed, returning depressed and with thousands of dollars in debt. He wondered what he had done wrong, having followed Gilbert’s script to the letter. “I assumed it would be easy to monetize the story of my adventure. Little did I know that the market for such stories had already become saturated.”