How ... Almost Torpedoed the World’s Chance for Peace

Every country has its heroes and black sheep, but ... and his crew were a whole new breed. They attracted trouble like a flame drawing moths, and their monumental series of ill-conceived blunders almost destroyed the world’s chance for lasting peace. 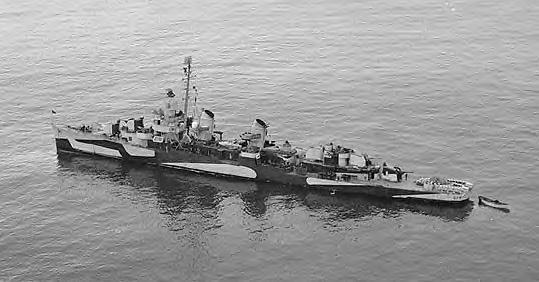 Every country has its heroes and black sheep, but ... and his crew were a whole new breed. They attracted trouble like a flame drawing moths, and their monumental series of ill-conceived blunders almost destroyed the world’s chance for lasting peace.

When ... was given command of a brand new destroyer-class ship, the future was his for the taking. He dreamed of performing heroically on dangerous missions and leading the country to great victories.

Unfortunately, such dreams would not come to pass. As the new ship slipped out of port, ... realized he had forgotten that all the anchors needed to be pulled up and stowed away safely. "I knew I was forgetting something but I couldn't remember what" ... explained. So the destroyer dragged one of its anchors along until it snagged onto the side of another ship that was docked nearby.

The anchor ripped the side of the ship open like a can of tuna, and the ship’s railings, lifeboats and other interior contents began tumbling into the ocean. ... was aghast, but was already late for a rendezvous with a convoy on a secret mission. So he left the other ship’s captain and crew screaming and shouting obscenities and quickly sailed out of port.

That was just the start, and ...’s new ship made good speed and reached the convoy very quickly. The convoy was taking a group of high-level government officials, including the country’s president, to a peace conference that would end war in a number of crucial theaters.

...'s ineptitude continued to threaten to torpedo the whole mission. As he conducted a drill dropping defused and harmless depth charges, he carelessly forgot to defuse one. "It was an honest mistake. I think I was under-slept or something and I had not yet had my morning coffee" expressed ... in his press statement. The live depth charge exploded in the water and the whole convoy started taking evasive maneuvers because they thought there was an enemy ship sneaking up on them.

When the panic finally settled and it was discovered that ... was to blame for it, the admiral in charge banished ...’s destroyer to the back of the class and ordered ... to stay out of trouble and do everything by the book for the rest of the trip. "I told them to get to the back of class, where they belonged, until they could get their heads out of their asses" the admiral recounted.

The convoy began conducting a drill to test their anti-aircraft systems, and balloons were released into the air as targets. ...’s crew fired off a few rounds to hit balloons that came their way, but they were mostly too far behind to see any major action. ... ordered the crew to do some drills with fake torpedoes, just to avoid the boredom of watching the other ships get all of the target practice.

After a couple of tests with simulated torpedoes, a clueless crew-member under ...'s bumbling command fired a live and loaded torpedo at their own convoy. All hell broke loose when the radar systems on the protecting ships detected a torpedo streaking through the water towards the lead ship carrying all the politicians.

The ship barely managed to avoid the torpedo, and the admiral couldn’t take it anymore. He ordered ... and his crew to turn around and report back to their home base for retraining. That was the end of ...’s very brief and ill-fated career as a navy captain. When they reached port, every single person on board ...'s ship, from the captain down to the cook, was arrested and thrown into the stockade while a full investigation was initiated to find out what happened. Facing a military tribunal, ... showed almost no contrition in defending his conduct. "Everybody, including captains of destroyers entrusted with global security, makes mistakes. I really don't see the point in playing the blame game."