Although people sometimes get brilliant ideas while commuting on trains, for ... inspiration struck after being hit by one. This is the story of how ... survived and went on to develop a potentially lifesaving "smart" shoe. 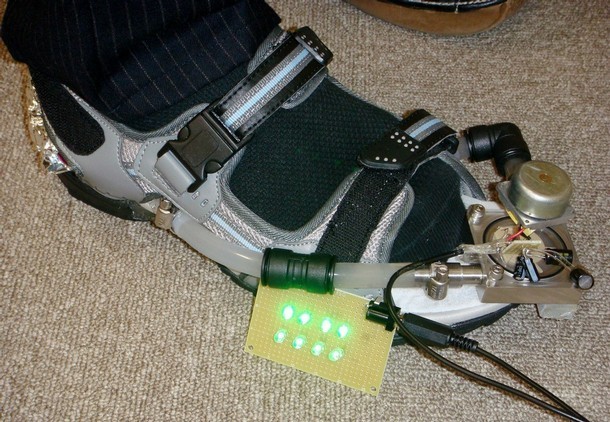 Although people sometimes get brilliant ideas while commuting on trains, for ... inspiration struck after being hit by one. This is the story of how ... survived and went on to develop a potentially lifesaving "smart" shoe.

... was waiting for his local train, checking his Facebook news feed while immersed in his favorite playlist. As the playlist pumped through his noise-cancelling headphones, ... noticed others beginning to cue for the oncoming train. Without taking his eyes off of his smartphone, ... stepped just a bit too far towards the track. To the horror of the surrounding passengers, the onrushing train collided with ..., breaking almost every major bone broken in his body and smashing some important organs in the process. “It was really painful” ... recalls, still visibly shaken by the memory of the trauma.

... remained in intensive care for quite some time. The doctors finally managed to put his back together and fix all his broken bones. By the end of his stint, he looked more like an Egyptian mummy than a human being.

Hardly able to walk or function on his own, ... began lounging around his home, struggling to the overcome the pain and boredom of his lengthy recovery. In a medicated haze, ... replayed the accident countless times. He thought to himself, “if only there was some way to safely board a train without having to take my eyes off of my smartphone or turn down my music--if only some technology existed to assist me in performing that multitasking feat--than this whole tragedy could have been avoided.” Rather than live in a sea of regret, ... decided to become proactive and find a way to address this unmet need.

He contacted a number of shoe manufacturers to pitch a novel idea for a “smart” trainer, a sneaker capable of alerting a preoccupied pedestrian to the threat of oncoming objects. Eventually one company bit, and ... began guiding the prototyping process remotely from his living room. “It was rewarding to know that I could do something constructive to help solve the problem of digitally distracted people colliding with their surroundings... Just think of all of the lives that might be saved.” By the time he had recovered, the first model of smart trainers was already under production.

The shoes boasted innovative motion sensing technology and voice guided gps to alert the wearer to all sorts of potential threats. They were engineered to communicate these threats as text or voice warnings through the user’s smartphone device, predicting the time until impact and providing the user with helpful suggestions for avoiding imminent collisions . The result, claims ..., is a seamless user experience of being safely preoccupied in public.

... remains convinced that the new trainers will revolutionize civic distractedness. “When the average person is walking, running, or just standing still, there are often hundreds of ways a random object can collide with them. Then you bring a smartphone and a good pair of noise-cancelling headphones into the equation, and the risk of being hit by an unforeseen moving object, a passing train for example, increases exponentially.” Based on his preliminary studies, ... asserts that the average shoe-wearer is over 10,000 times more likely to be hit by a train when they are not looking where they are going then when they are. With numbers like those, it is no wonder that customers are already lining up, ready to let their feet do the talking.