The Carrot and the Stick: ... Creates the Healthiest Smore

While camping with friends, ... stumbled upon a culinary invention that has shaken up the world of food-related campfire traditions. 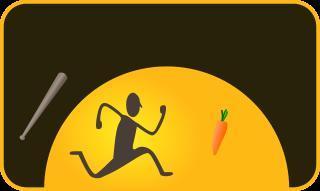 While camping with friends, ... stumbled upon a culinary invention that has shaken up the world of food-related campfire traditions. Having exhausted his supply of sausages and marshmallows, ... pondered what else he might skewer with his forest stick and roast above his campfire’s embers. In a bold experiment, ... placed a carrot on his stick, slowly browning it over the heat.

After the carrot had been carefully roasted, absorbing the fire’s smokey flavor, ... began to imagine how the vegetable might substitute for a marshmallow’s creamy sweetness in a healthy smore alternative. He examined the foods his friends had brought, and decided on a rice cake and peanut butter. He sandwiched the carrot between two peanut butter coated rice cakes, squeezing the now softened vegetable to the cakes’ edges, and drew his creation to his lips.

The result was like something one might find in a vegan food coop: it resembled the original food in form only and relentlessly reassured the palate that a healthy and sustainable dietary choice had been made. “The moment I tasted it I knew I had stumbled on to something big. The carrot-and-the-stick smore was just that: all of the enticement of a smore combined with all of the punishment of denying your tastebuds the childhood pleasures of marshmallow, chocolate, and graham cracker...I knew the market for this thing was going to be huge.”

Even though none of ...’s friends agreed to try his creation, ... remained undeterred. He returned from the trip ready to market the idea to cooking shows, restaurants, and progressive grocery outlets. “Parents are always trying to get their kids to eat healthy. The secret is to convince children that they are getting something they actually want, and then substitute the key ingredients with healthier alternatives. It’s the classic bait and switch and they never catch on” ... confidently asserts, adding that, “while it might not be delicious, it almost resembles something that is.” For family camping trips around the country, ... hopes that might just be enough.