When ... decided to go tidepooling, he had little idea that his innocent weekend excursion would lead to the death of a venerable 500-year-old ocean quahog named Rodrigo de Bastidas. 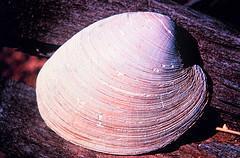 When ... decided to go tidepooling, he had little idea that his innocent weekend excursion would lead to the death of a venerable 500-year-old ocean quahog named Rodrigo de Bastidas. To ...’s untrained eye, Rodrigo de Bastidas appeared nothing more than a common bivalve amongst the reef, albeit one that seemed unusually large next to its neighbors. After stumbling over the giant clam, ... grew curious. “I saw this clam in the pools and thought to myself, ‘Damn, that is a big clam. I bet it's really old too. I wonder if its tasty?” Thoughtlessly, ... wrenched the clam from its bed and cracked it open to show it off to seamen at the nearby wharf.

The seamen agreed that it was a big old clam. “That’s probably the biggest and oldest clam I’ve ever seen. That belongs in a museum, not a chowder” commented one seaman, who has asked to remain nameless. And ... did just that, shuttling the clam to marine biologists who also confirmed that the clam was in fact extremely old. The biologists saw that the rings on the inside of the clam were so close together that their team had to verify their results by counting the rings on the outside, which proved to be an accurate pointer towards the age of the clam which was now declared to be more than 500 years old, and dead as a doornail. They dubbed the clam Rodrigo de Bastidas, after the Spanish conquistador whose westward exploration of the Isthmus of Panama was cut short after his fleet was lost to shipworm in 1502.

A flurry of fingerpointing and accusations against ... erupted within the scientific community, which was soon picked up by the media at large. Throughout the press, ... was quickly demonized as a cold-blooded clam killer. Nevertheless, ... insists that he is not a monster. “All I did was see something I thought was interesting and remove it from its natural habitat. I had no intention of killing something of great scientific import. I feel truly terrible for what I have done to Rodrigo de Bastidas.”

For his part, ... feels sobered by the experience. “Next time I see a clam that looks like it might be 500 years old, I can assure you I will be more careful with it” he promises.