After entering into email communication with an actual Nigerian prince, ... is awarded a royal celebration. 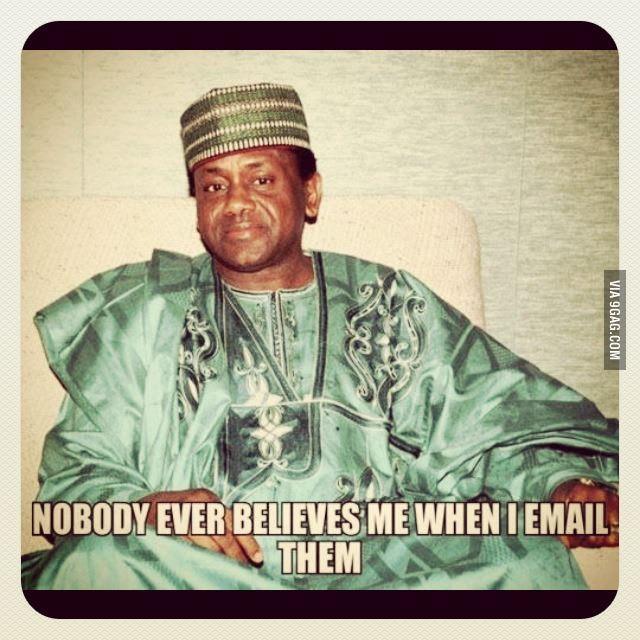 Surprising news out of Abuja today as the capital of Nigeria is buzzing in preparation due to a Royal Decree. Many local businesses can’t believe their good fortune; and they all have ... to thank. Mr. ... has been credited with unexpectedly saving the country of Nigeria somewhere in the range of 650 million USD through some timely advice. The minister of finance is quoted as saying, “Mr. ... has enabled us to prevent a transfer of funds that could have easily bankrupted our economy.”

While most internet users have at some time received correspondence from supposed Nigerian princes, Mr. ... experienced the real deal. Last Thursday, as he was sorting through his junk email, ... realized there was an anonymous request for immediate help with a large amount of money. Unexpectedly, instead of asking for a short-term advance of funds with a guaranteed return, the sender simply wanted some honest advice. The Honorable Prince explained his strange request saying, “Not everyone can be trusted. I was about to enter into a highly unusual high-stakes transaction, and I wanted the opinion of someone who would be both trustworthy and discreet. ... has proved to be an invaluable resource to me and my country and that is why we plan to publicly honour him.”

Through some basic research, Mr. ... uncovered a plot to defraud the prince of millions of dollars and warned the prince before control of a royal expense accounts was granted to disreputable parties. In response, the royal family has quickly organized a major ceremony to honor Mr. ... and reward him for his efforts.

And what a ceremony it is expected to be, preparations at the palatial residence are being said to rival that of the last royal wedding. “My family and I intend to show our gratitude to the fullest.” The minister of Finance echoed the Prince’s statements, saying that with the amount of money they have saved, “no expense will be spared to honor Mr. ...”. Many details about the event are being kept close to chest, including whether or not a number of pop stars and movie celebrities will be in attendance. This is expected to be an international affair and many foreign dignitaries have been seen arriving at the prince’s residence. What we can report with certainty is that local shop owners are very appreciative; one butcher even extended his personal gratitude to ... for both his service to Nigeria, and for spurring local tourism. Another shopkeeper (a local florist) reported that the National Choir might be preparing a new anthem dedicated to Mr. .... Other possible rewards might include an honorary position in the government.

While the idea of a non-citizen being made part of the government, even in an honorary position, might seem strange, it is obvious that Mr. ... is held in high esteem by both the prince and the general public. In an unofficial poll of capital citizens, an overwhelming majority said that no government position was too exclusive for someone who had rendered major services to their prince. For his part, Mr. ... remains humble, insisting that, “I just did what anyone might do when solicited for critical financial advice by African royalty.”